How to Avoid the Caffeine Crash 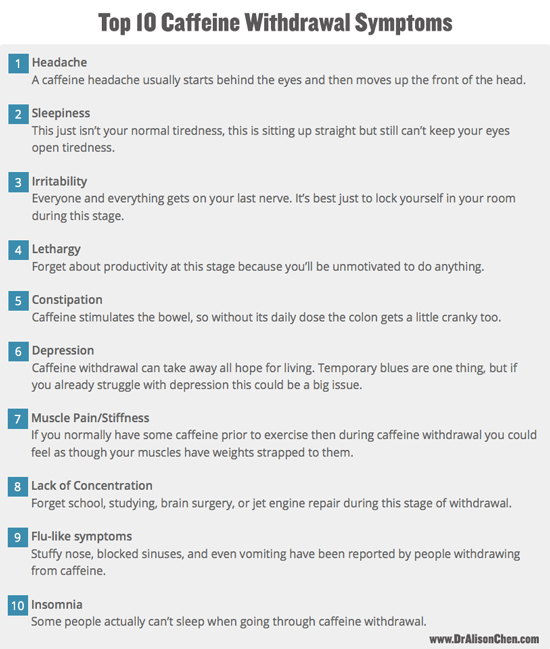 There are several ways to avoid the caffeine crash, including spreading your caffeine intake throughout the day. This strategy prevents the afternoon crash by making you less irritable and makes you more pleasant to be around at work. Other methods for avoiding the crash include getting enough sleep and drinking plenty of water. For adults, a recommended amount of sleep is between seven and nine hours.

Symptoms of a caffeine crash

Caffeine has various effects on the body and can lead to a crash. It causes the blood sugar levels to fluctuate, making the body feel lethargic and cranky for a few hours. The effects of a caffeine crash can be mild or severe, depending on the individual. The effects are more severe in people who consume a large amount of caffeine daily.

Caffeine is the most common psychoactive drug in the world. An average American consumes more than one hundred and fifty mg of caffeine daily. While caffeine can increase your energy levels and improve your concentration levels, it can also lead to a crash. It also increases adrenaline levels, which can lead to an increase in heartbeat and blood pressure. These changes are temporary.

The best way to avoid a caffeine crash is to spread your caffeine intake throughout the day. If you are prone to having a caffeine crash, you should avoid consuming large amounts of caffeine close to bedtime. If you must drink a large amount of caffeine, try drinking it in smaller amounts, starting with eight ounces and working up to a 16-ounce glass.

The symptoms of a caffeine crash can vary from person to person, but they include feelings of drowsiness, fatigue, and irritability for up to 24 hours. Caffeine crashes are common after consuming moderate or high amounts of the beverage. People who consume a large amount of caffeine may experience the crash when they are sick or have a cold. To avoid experiencing a caffeine crash, make sure to drink coffee at various intervals throughout the day and take breaks whenever needed.

Caffeine has a long half-life. If you drink a coffee in the morning, it will take about six hours to clear your system. Caffeine intake should be limited to two cups a day. Otherwise, the caffeine will remain in your body and lead to a caffeine crash.

Symptoms of a caffeine overdose

Caffeine can be toxic to the body, resulting in a variety of symptoms. Those who consume too much caffeine should seek medical advice immediately. These symptoms may include agitation, tachycardia, palpitations, and involuntary muscle contractions. It is important to call a doctor if you experience any of these symptoms, and to provide a list of any food and drinks you may have consumed before you began feeling symptoms.

The symptoms of a caffeine overdose vary greatly from person to person, but the effects are usually temporary and go away after a few hours. The treatment for a mild caffeine overdose may involve staying hydrated and avoiding caffeine-containing drinks for 48 hours. More severe cases may require hospitalization or even hemodialysis. If breathing becomes difficult, the patient may also require respiratory support.

Overdose symptoms can be unpleasant and can range from mild to severe. The more severe symptoms may include heart palpitations, vomiting, and uncontrollable muscle spasms. In severe cases, they may even result in death. The first sign that you may have overdosed on caffeine is a feeling of agitation.

A small amount of caffeine can increase blood pressure, heart rate, and urine output. Caffeine may also affect sleep. It can cause difficulty falling asleep and lead to a shallow sleep. It is best to avoid caffeine before bedtime and avoid it altogether if you have heart problems.

In extreme cases, caffeine overdose may lead to seizures or cardiac arrest. It is recommended to limit your caffeine intake to four cups per day. Caffeine is also known to cause jitters, and those with a high caffeine sensitivity should drink only three to four cups a day. Caffeine can also make you feel nauseous or irritable. You should avoid drinking caffeine if you experience these symptoms, and drink plenty of water afterwards.

While caffeine overdose is rare, it is important to seek medical attention if you feel any of these symptoms. If these symptoms persist or become serious, contact poison control or your local emergency services.

Ways to avoid a caffeine crash

Caffeine is an energizing substance that increases your alertness and focus, but it can also cause a caffeine crash. This is when you start feeling tired, irritable, and lack concentration after drinking too much caffeine. If you’re experiencing this, try taking some simple steps to avoid it.

Avoiding the afternoon crash by spreading out your coffee consumption throughout the day is a good start. Getting enough sleep at night will reduce your need for caffeine during the day. Ideally, you should get between seven and nine hours of sleep. Additionally, you should drink plenty of water to maintain your energy levels.

Lastly, avoid caffeine close to bedtime. If you must drink caffeine, try to limit it to 400 milligrams per day. Caffeine crashes are more likely to occur when you drink too much or take too many caffeine pills. However, you can still minimize the severity of them by getting adequate sleep. Another way to avoid caffeine crashes is to consume it slowly.

Drinking plenty of water can also help avoid the caffeine crash. Drinking water helps your body stay hydrated and prevents headaches. It also helps your brain function. You can also avoid consuming coffee on an empty stomach to avoid the crash. It will also save you money! And remember: you don’t have to stop drinking coffee altogether. You can still get a great dose of energy from it, but it won’t be as strong.

The best way to avoid a caffeine crash is to gradually reduce your caffeine intake. Caffeine can become habit forming if you don’t cut it out completely. So, start reducing your intake slowly over a few days. It will help you avoid the inevitable crash in the middle of the day.